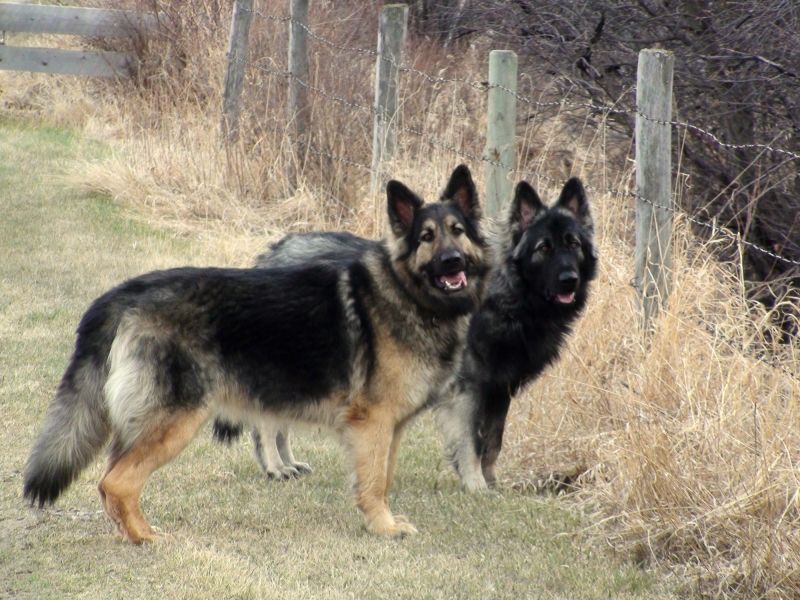 Rocky Mountain Shilohs is pleased to announce the August 2016 litter from the pairing of Atara and Koal.

Atara was born at Guardian Kennels from the first litter of Jetta and Rocky. Atara inherited great qualities from both her parents. She brings to the pairing excellent bone, exceptional size, great hips, and a confident, outgoing personality. Nothing fazes her, and she loves to meet new people.

Koal was born at River Pack Shilohs from the much anticipated Ginger / Piston litter. Ginger was the 2011 and 2013 ISSR Grand Victrix and Piston was the 2011 ISSR Grand Victor, so Koal comes from superb examples of the ISSR Shiloh Shepherd breed. Koal also inherited great qualities from both parents. He brings to the pairing a beautiful head with strong stop, square muzzle and good dome, along with gorgeous dark colouring and dark, almond shaped eyes (just to name of few of his great qualities).

Atara and Koal's first litter, born September 13, 2015, was exceptional in many ways, producing puppies with confident, outgoing personalities, and, as Vanessa Dutton from Guardian Kennels said, "nice solid frames, with great chests, heads and lovely bone". This litter was co-owned  with Guardian Kennels,  and produced 3 males and 3 females : all plush, mainly sables: black, grey, and brown; as well as one black and tan dual.

We expect this litter to be as outstanding as the first Atara / Koal litter: large puppies with exceptional conformation, and solid, outgoing temperaments, all plush, with a variety of sables, and possibly one or more duals.